The site of the Wounded Knee massacre is being sold to the highest bidder.  See the 'Welcome' page for more information.  For a Native perspective, Click this link - http://www.nytimes.com/2013/04/12/opinion/save-wounded-knee.html?_r=0 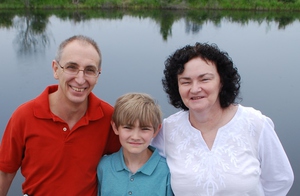 Theresa and Ken Grut live in Florence, South Carolina. They were married in 2002 and have a son, Aaron, who loves music. They have been making Native American styled flutes since 2008.

Theresa loves Native culture and going to Pow-wows. Once, when in Georgia they were captivated by the Native American Flute being played by National Champion Hoop Dancer Lowery Begay and soon thereafter bought their first flute.

After playing the flute for a while, Ken began making flutes using carving tools inherited from his father.  Ken carves and tunes the flute and Theresa burns designs into the flute, making it a work of art. In 2010 they started selling flutes through their business “Carved Creations”.

In the Spring of 2011, on a vacation to South Dakota the Gruts felt led to take a trip to the Pine Ridge Reservation. On their way out they saw a group of people in a circle in the intersection at which they entered. They were about to take an alternate route out but decided to check it out.

They discovered that these people were performing a memorial walk for a youth who had committed suicide. The ceremony was organized by one of the efforts the Pine Ridge Health administration uses to combat youth suicide. This effort strives to teach young people that life is sacred and that healing can be helped by getting youth to identify with their traditional Lakota values (humility, persistence, etc.). They intervene through a suicide hotline and tend to the victims of suicide and their families.

After some prayer the Gruts decided to sell flutes to support these efforts and raise awareness of this issue. And so Flutes for Hope was born.  After some time one of the members of the Health administration asked them to conduct a flute-making workshop with a local school in Pine Ridge. Since that windy day in June 2011 Flutes for Hope has grown into an outreach serving communities in several reservations.﻿